From the sea to the Venice Lagoon

This itinerary touches ancient and more recent places recalling the natural history of these lands, that have been signed by the passage of rivers and sea streams together with man's artificial action. The itinerary follows the sraight canals of the old Venetian coast road that, beginning from the Northern side of the Venice lagoon, joins the Sile, the Piave and the Livenza spreading out then in the Caprulan lagoons and even further. A teeming settlement and massive activities grew along the long sand peninsula of the Northern Coast of Cavallino. It is the natural protection of one of the most beautiful and interesting areas of the Northern Lagoon, where landscapes marked by the presence of man alternate with vast horizons above the sandbanks.

Notes: in part of the itinerary, taht is the connection roads to the seaside resorts the traffic can be very intense above all in the summer. In the mild season it is possible to dedicate more time to the beach and to the visit to the islands of the Venice Lagoon.

Leaving the rocks along the promenade of Caorle, that have been shaped by the sea or by the hand of artists we follow the typical road along the canal of the fishing-boats till the crossing with the Provinciale (provincial road). We keep left and pass the small bridge Saetta, always keeping the left towards Porto Santa Margherita, a well-known seaside resort which sees in its proximity the mouth of the River Livenza. We follow the directions to Eraclea Mare till the roundabout located in the centre of the Valley Altanea, today reclaimed from the sea; we turn right and reach the river village Brian. After the canal Largon we turn right and past the small centre we reach the site of Porte di Brian, large lock which prevents the salted waters to invade the watering river-beds of the reclaimed land. We leave the picturesque landscape of the river crossing and we proceed along the Canal Largon towards Torre di Fine. The road winds in a very pleasant environment which shows big buildings which worked for the land reclamation, villas and rural houses surrounded by trees, orchards and rice-fields: the last ones between the Piave and the Livenza. Past Torre di Fine we go along via Revedoli an the homonymous river and we pass a crossing travelling under the bridge which leads to Marina di Eraclea. Small houses, boats berthed to the banks and fishing-equipments show the strong and old relationship between man and river. Near the boat bridge, before we reach the other side of the Piave, it is interesting to follow the small ground-road which flanks the first part of the Canal Revedoli, till the point from where it flows in its bed. The abandoned rests of the Porte witness the prosecution of the old coast road, which allowed to reach the lagoon of Marano thanks to a series of internal canals. The old house of the keeper can be seen on the other side of the river together with the cane thicket and the suspended square fishing-nets. The charm of this landsacape takes us to Cortellazzo passing on the floating boat bridge and on the top of the right side of the bank of the Piave.

From Cortellazzo, small fishing-village which grew around the locks of the Venetian coast road, we proceed towards Jesolo Paese. We take the road which flanks the navigable canal joining the waters of the Sile to those of the Piave, that in 1595 according to a project of the Serenissima Republic, had to solve the problems of the closeness of the mouth of the Piave to the port mouth of Treporti. Along the straight road which in 6 km leads to Jesolo Paese sounds and colours of the river alterante with a variety of landscapes: vast fields of mono-cultivation, large orchards, great buildings of the agricultural holdings. At the traffic light at the swing-bridge, we go on along Via Cesare Battisti, pass the seat of the Public Library (which goes back to the 19th century) and Piazza I Maggio, till we reach the swing-bridge on the Sile-Piave Vecchia.

We proceed to Via Rimembranza until we reach again the river, we turn left along Via Cristo Re flanking the right side of the river. The itinerary winds first on an asphalt and then on country road along the valley of Dragojesolo and the river and leads to the Porte del Cavallino. These locks, like the others, were built by the Serenissima to prevent the fresh water to flow into the lagoon and change the composition of the brackish waters; the diffusion of marsh canes prevented the lagoon to turn into a marsh. The locks of Cavallino allow the connection by water with the lagoon and lead to the Venetian coast road. From the picturesque village of the Porte, bike on the side, across the metal gangway, we reach Via Fausta next to the new bridge on the Sile.

Going on towards the sea we can easily reach the mouth of the Sile next to the Lighthouse. Boats of every kind and dimension are berthed along the last part of the river bed, revealing human activities related to the sea: from fishing, the most ancient, to tourism, the most modern. Along the first part of Via Fausta in the direction of Cavallino, we notice on the right side an enclosed thin strip of ground. It is the Stazione Biofenologica di Cavallino, old coast line where the still preserved fossil dunes are object of botanic studies related to the littoral flora of the Northern Adriatico. From the square in Cavallino we keep the right and go along Via Pordelio flanking on one side the lagoon with Valle Falconera and the homonymous isle, Valle Musestre and the Canal of Pordelio, on the other side thick portions of lands cultivated with vegetables. After about 7 km at a crossing with the traffic-lights we pass turning right the swing-bridge on the Pordelio: Treporti can be recognized thanks to its two typical bell-towers that watch over the 18th century church. At the following bridge on the Canal Portosecco we can see a characteristic flat, large boat of the lagoon used for decades for the tranport of well-known horticultural products to the market of Rialto in Venice. Past the square after another bridge we get to a fork: on the left the road leads to the "Ricettoria" a very pleasant place for seeing the landscape, crossing of the three canals of Treporti, Burano and San Felice, from where by boat we can reach the major islands of the Northern Lagoon: Burano, Torcello, Murano, St. Erasmo and even Venice. On the right side we proceed along the Canal Saccagnana following the directions to Lio Piccolo: cultivated fields with typical rural houses and modern cultivations alternate with canals, marshes and ditches. At the crossing with the bus stop we turn left crossing the charming Piazza del Prà, hisorical memory of the isle of Saccagnana, surrounded by old rural houses, casa signorile and the oratory. The road narrows and winds among the houses and on the bank it marks a border: on one side the mainland with the geometry of greenhouse cultivations, on the other side the wide landscape of sandbanks and fishing-valleys; on the background beyond the Canal San Felice we see the bell towers of Burano and Torcello. The changing wide sandbanks with the winding presence of the "ghebi" (shallow canals), the flights of the Cavalieri d'Italia and of the Garzette (species of birds), lead the small road suspended in a landscape of lights, sounds and enchanting silence. From there we proceed to the small village Lio Piccolo, old shore now enclosed in the l agoon.

We are in the heart of the Northern Lagoon, one of the most interesting areas, from the environmental point of view, of the Venetian lagoon territory, ideal habitat for the stay and hibernating of many species of water birds: ardeidi, anatidi, limicoli. The typical emerged vegetation is composed of limonio, salicornia, obione, astro and artemisia, enchanting from July to September for the colour that the sandbank has after the bloom of the plants.
After a stop in the small square adorned by centenarian jujube, we go back deviating briefly to the left next the bridge towards Mesole. These are peaceful places where time seems to have stopped: a few houses surrounded by gardens and kitchen-gardens, a tiny church, a convent of the 16th century are the signs of human presence on the thin strech of emerged ground called Mesolo. We go back to Treporti and then always straight ahead to Ca' Savio. 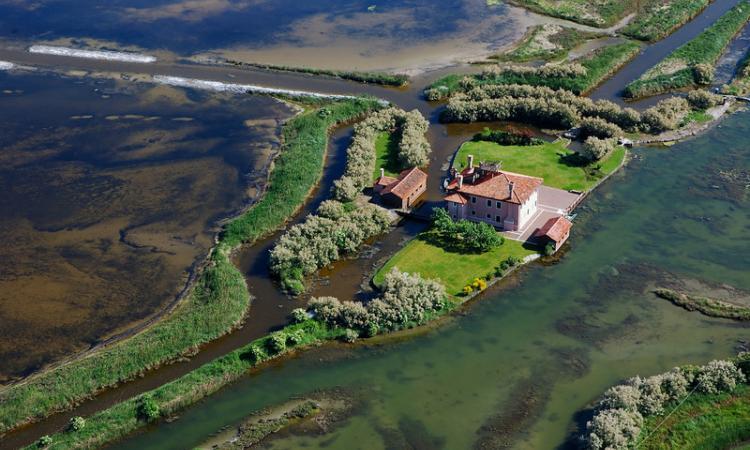 A Trip Along the Coastline
From the sea to the duny beaches, from a cane thicket to the shallow valley
read 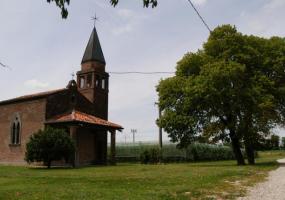 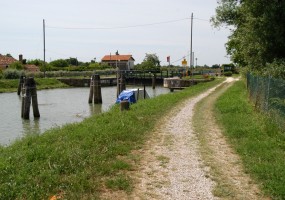 Cycling
Ambient Bike, a guided excursion to explore the over 150 km cycling tracks of
read